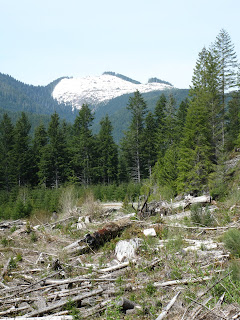 Young seedlings are establishing in the clear cut forest in the foreground while the back ground shows a large clear cut. Clear cuts in forests in BC tend to generate negative reactions from the public. Clear cuts in the landscape tend to give a feeling that there is something amiss. Foresters, the Government and forest corporations tend to dismiss these impressions as layman's reactions.

You need all the silvicultural systems to manage a forest and clear cutting needs to be one of them. Discussion by folk from the BC forestry establishment on clear cutting usually ends there, but the unease about clear cutting remains. When lots of folk feel uneasy about something, there is usually some justification that not be immediately evident.

The BC forestry establishment has responded to this unease by inventing a completely new kind of silvicultural system called the variable retention silvicultural system. It involves leaving some individual trees or patches of trees within the area to be harvested. The idea is to introduce some diversity of ages and leave some islands of older growth to help accommodate biological diversity. Even dead or dying trees can be left standing to provide habitat for woodpeckers and cavity nesters. There is a legitimate intent to accommodate biological diversity but there is also a political intent to try to make clear cutting more acceptable.

In BC, most forest harvesting is clear by cut and there are few examples of other silvicultural systems being applied successfully. Clear cutting is usually the least costly method of harvesting and requires less skill and local knowledge than shelterwood or selection systems. A silvicultural system is a system of tending a forest. The context is one where there is professional forester with responsibility and some freedom to manage a specific forest. In the case of shelterwood and selection silvicultural systems, the forester would have gained experience from a predecessor and would put considerable effort into passing that information on to his replacement. Unfortunately no such system of local professional forest stewardship exists over public forest lands in BC.

The main reason for having most of BC's forests in public ownership was to enable the trustee, the BC Government, to ensure a wise system of forest stewardship. Instead, BC Government administrations have created a political system of entitlements to BC public forests. Government partnered with commodity producing forest corporations in a scheme of industrial forest management that is imposed on the forest. It follows the industrial assembly line concept. Clear cutting is the low cost, low skills fit for the model.
Posted by Andrew Mitchell at 2:29 PM No comments:

Fire storm risk near BC Communities

There has been little action to reduce the risk of fire storms in forest near BC communities. This item has been in the news lately. Click on the title to go to an article by the Canadian Centre for Policy Alternatives on this subject.
Posted by Andrew Mitchell at 1:36 PM No comments:

Click on the title to go to the Web site "A conversation on BC Forests". "The Healthy Forests-Healthy Communities initiative aims to inform decision-makers about the people’s vision for the forest lands of British Columbia, identifying areas for improving long-term sustainable management to achieve their goals." Check the site for the date of the meeting in your community.
This initiative could bring some long overdue changes if it manages to get outside the box. The original vision of public forests that are independently managed to sustain healthy communities and forest economy has been boxed into something much different. The BC Government chose to allocate most of the harvesting rights in your forests to forest companies and pass increasing forest management responsibilities to these forest companies. Our forests, communities and forest industry has suffered under this arrangement. We need to get our forests out of this box.
Our arrangements for forest management need to be fired and replaced. How do the people, the shareholder's of the public forest, inform the decision makers, the Government of BC of its improvident record as a Trustee of our forests? Will the Government and its private sector forest management partners then fire themselves from the position of forest managers? Motions to abolish slavery were brought up in Parliament in London, England without result because some members had financial interest in the slave trade. It took a people's movement against slavery to bring abolition.
A key concept in the initiative is trying to put Forest Policy, expert opinion and community concerns on the same track. It notes that these currently operate on "potentially separate axes". I am not sure what that means. However, forest policy is made centrally by the BC Government and for the last 65 years the thrust of that has been about the handing over of public timber and increasing forest management responsibilities to forest corporations. Instead of providing forest policy that insures good forest stewardship, government administrations have been providing avenues for stealth privatization of public forest resources. The expert opinion is the trained forest resource managers given limited independence by their government and forest industry bosses. The community or the public who are the shareholders get a chance to comment.
If the initiative wants to get community concerns, expert or professional opinion and forest policy on the same track, it will need to propose alternative legal and institutional arrangements. One promising alternative is the following:
Community concerns can be handled by elected board of a Local Forest Trust that hires expert opinion in the form of professional forest resource managers to manage the local forest landscape under trust documents that require sustainable forest management to the standards of the Montreal process. The local forest trust would be operate like a business with logs being sold on an open market.
Forest policy and collective services, auditing and appeals could be handled by a Forest Trust Assembly governed by an equal number of elected and professional forest management delegates from Local Forest Trusts. Major policy changes would require ratification by two thirds of local forest trusts.
The initiative needs to give local communities ideas on devolved and democratic management of BC's public forests. Communities need to take charge and become the decision makers. The elected representatives in Victoria will follow suit if the movement is strong enough.
Posted by Andrew Mitchell at 3:42 PM No comments:

Reforestation Crisis in BC

Anthony Britneff, a retired forester writes in the magazine of the Association of BC Forest Professionals on the subject in a well researched article.  See article at : http://www.abcfp.ca/publications_forms/BCFORmagazine/documents/BCFORPRO-2011-3_AllArticles/BCFORPRO-2011-3_Britneff.pdf