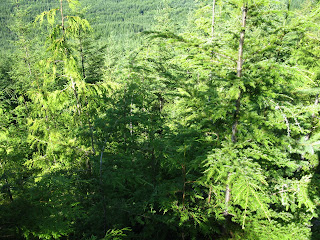 The forest is growing back after harvesting, so everything is OK.  This simple idea has made industrial forest management acceptable in British Columbia. It enables the label "sustainable" to be attached to industrial timber production. The virgin coastal rain forest in the valley where the photograph was taken has been exploited by clear cutting most of the entire forest in the last 35 years. Most of the valley has reforested by natural regeneration and has saved the cost of tree planting. Vigorous stand of young trees have replaced the virgin forest.

Some forest areas in BC give challenges to regeneration and occasionally the subject of " Not Satisfactorily Restocked" areas surfaces in the media and gains a bit of interest. If the forest is not growing back there is a problem that is readily obvious.  There is a problem with with the natural regeneration in the photograph. The natural regeneration has been so successful that there are too many trees. Young forests with this problem can be spaced or thinned to allow for better growth of the remaining trees. Thinning, spacing or stand tending is not the norm in BC's forests. Once in a while, some special program of limited duration will give some funds for a limited amount of stand tending. The BC Government as trustee of BC's public forests has often used forest revenues for other purposes.

Natural competition within a dense stand will eventually see some of the less vigorous trees die out and natural thinning does take place. However, it usually takes longer to get large merchantable trees if the forest is not helped along with some spacing or thinning. The valley in the photograph is exposed to Pacific storms and winds.  Trees with a height diameter ratio of 60 (a 60 foot high tree that is 1 foot in diameter near the bottom)  are susceptible to wind throw and considerable economic loss.  The trees in the photograph are on track to be susceptible to wind throw.  The previous virgin forest trees were better shaped to withstand the wind.