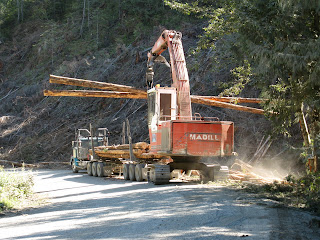 There is more to this photo than first meets the eye. It is a story of how the dots were not quite connected on the scientific forestry idea of forty to fifty years ago. The idea gave rise to the rapid liquidation of virgin coastal forests. A scientific logging binge one might say! Forty years ago some foresters that worked for these coastal forest companies were thinking about connecting the dots and were discussing the inevitable future. These foresters wondered about the wisdom of harvesting the best most accessible timber first and what would happen when the time of transition arrived. The transition would be a time of dealing with the least accessible and valuable virgin timber and dealing with the harvest and manufacturing of  logs that were much smaller in diameter.

Since the liquidation of the virgin forests occurred rapidly the transition is rapid and difficult. The heavy log loader is capable of loading very large logs. Instead it is employed in placing small second growth logs on the truck. Most of the BC coast is mountainous and logging is mountain logging. It is more costly than logging on the plain and the costs of harvesting on the BC coast are high. A stand of young second growth has much less total volume of timber compared with a stand of old growth. This fact tends to increase the cost of logging a unit of volume of second growth. Present harvesting of second growth targets the most accessible timber to help reduce harvesting and hauling costs.

The foresters that saw this coming forty years ago were cogs in the wheel of a machine. They had specialized tasks in forest engineering or silviculture. The drivers of the machine were far away in centralized locations of Victoria and Vancouver. The BC Government and its partners, an oligopoly of a few forest corporations given timber allocations at non market administered prices were on a roll to convert virgin forests to quick dollars.

Posted by Andrew Mitchell at 2:40 PM

Email ThisBlogThis!Share to TwitterShare to FacebookShare to Pinterest
Labels: Harvesting