Ecology is a subject that comes to mind when we think about forests.  The geography, terrain, soil, climate plants and animals interact in complex ways often in fairly long term cycles to produce a unique living forest. We humans tend to leave ourselves out of the ecological equation when it comes to forests. Human ecology or how humans interact with a forest is a major factor that we tend to ignore. We are not just talking about the foresters and loggers who work in a forest, but we have to look farther into the laws and institutions that govern forestry. These in turn are affected by politics, social movements, economic and taxation policy.

Does the present " Occupy Wall Street Movement" have implications for BC's forests? This movement may grow or fizzle out, but it has raised questions about corporate power in society.  Large organisations are needed to run large industrial plants etc., but there is a legitimate concern that corporations have too much influence on the levers that control society. An era of industrial feudalism may await, if we do not find ways to reduce corporate power.

Are we heading down the wrong road?  If we are headed in the wrong direction, we should not blame it entirely on the corporate villain. Just about everyone needs to follow the piper. What tune has the piper been playing?  At election times we tend to vote for the candidate that promises economic growth and jobs by attracting investment.  Deep down, most of us are aware that a future of unlimited growth, means no future if we exceed the earth's capacity to support us. Attracting investment is a code word for aligning taxation policies to attract international corporate capital. The recipe calls for low rates of corporate taxes, consumption taxes, reduction of progressive income taxes and deregulation. These taxation policies tend to produce poor income distribution in a society and negative effects on the economy. The attraction of fast money is too great.  Governments bail out or assume the losses of financial institutions to maintain the system after some fast buck financial schemes go sour.

How do forests fare in a society with a emphasis on fast money?  A long term investment for a human is perhaps one to three decades at most. Most forests are growing on a much longer cycle of  about a century or more. 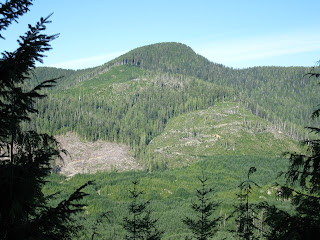 This BC coastal forest was operating on a natural cycle of several hundred years before the fast money idea injected itself into this forest landscape. The virgin forest near the top and over the hill will continue to work on the long term cycle of hundreds of years because it is a park or protected area. The fast money idea has worked its way through most of the valley replacing the virgin forests with young trees in the space of less than three decades.

The fast money idea in BC's public forests goes under a euphemism. We call it forest policy or the forest tenure system. After World War II the BC Government needed fast money to bring infrastructure and economic growth. It looked to forest corporations to turn the forests into fast money. It saw that its interests were best served by establishing an oligopoly of commodity wood products producers. Corporations were allocated harvesting rights to large volumes of public timber under a non-market system of administered prices. This Government and corporate alignment did seem to work well initially. Mowing through the best virgin timber forests to supply ready markets did produce fast money. The main market was the USA. This market was wide open after World War II because US forests were recovering from an earlier mowing than BC. When the US timber supply started to recover toward the end of the 20th Century, US wood producers were more ready to supply their own market. BC wood became vulnerable to discriminatory export tariffs or taxes.  The administered prices for timber allocated to forest corporations was open to criticisms of government subsidy.

The improvident mowing of the best virgin timber led to problems on the BC Coast as the corporate forest industry started to tackle the left-overs. Less accessible timber higher on the mountain was less valuable and more costly to harvest and transport. In the interior Lodge pole pine was regarded as the left-over species and avoided in favor of spruce and other species. Huge areas of pine became old and susceptible to mountain pine beetle attack. A super outbreak of mountain pine beetles, much larger than a natural outbreak wasted tens of billions of dollars worth of timber and left many forest dependent communities with an uncertain future. This waste of public resources and value by the Government and forest corporations was much greater than any financial scandal in BC's history. There have been major public outcry over waste of a few million dollars, but the epidemic has gone under the public's radar. The public got sold the story that the beetles survive better in mild winters and were pointed to climate change. However, this skillful propaganda was only part of the story. The public bought the simple, easy to understand, wrong answer to a complex problem. Governments and corporations are masters at public relations. They did a good job of selling not quite the whole truth.

Email ThisBlogThis!Share to TwitterShare to FacebookShare to Pinterest
Labels: Corporatism