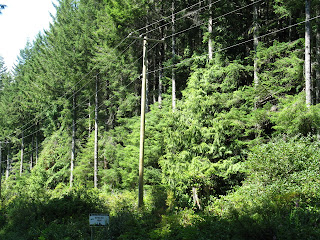 In the last blog, it was noted that silviculture in BC seldom extends beyond regeneration after harvest. The forest stand in the photo was planted in 1960 and it was spaced in 1980. The stand now has fewer larger trees and it is more resistant to winds. Stand tending has benefits
This stand is on the west coast of Vancouver Island.  There quite a few alternatives for the future of this stand. In most parts of the world, growth in a stand of conifers will decline when an age of 70 to 100 years is reached.  It is usually better to harvest and establish a new stand.
On the west coast of BC, nature grew some of the largest conifers in the world. Stands of conifers can put on good growth for 200 years. Later growth is quality growth of clear knot free wood. Stands can be thinned to provide timber before the final harvest. Nature on the west coast of BC was into the business of long rotations, so there may be some wisdom in terms of security of wood supply in following what nature was doing.
Unfortunately BC does not have a diversity of wood products manufacturers. The higher quality wood from longer rotations needs value added manufacturers to realize its full value.  Most of BC's timber from its public forests has been allocated to an oligopoly of commodity wood products manufacturers. Our wood utilization plants are set up to handle volume rather than value.
The stand in the photo is situated near a paved highway and it will be attractive in terms of low truck hauling costs. It is likely to be harvested in the near future to feed construction lumber mills or pulp mills. The Coast of BC presents challenges bay way of terrain that adds costs to competitive industrial commodity timber production. Longer rotations aimed at growing wood value rather than just wood volume may be a smarter option for the management of coastal forests. Unfortunately we are so locked into industrial commodity timber supply that we cannot stop to consider alternatives.
Posted by Andrew Mitchell at 2:58 PM

Email ThisBlogThis!Share to TwitterShare to FacebookShare to Pinterest
Labels: Silviculture