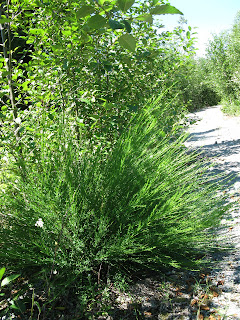 At the New Year we like to look for signs of hope.  BC's public forests have a high level of forest resilience and that gives hope for the future. Forest resilience means that a forest will return to its original conditions and functions after it has been disturbed. Indigenous virgin forests, like those in BC, have greater resilience because diverse ecosystem components are there to effect recovery.  A considerable area of forest has regenerated naturally, and even in areas that are replanted there is usually some naturally regenerated trees. Ground vegetation and soil organisms remain or recover in time. In areas that are replanted with nursery seedlings, there is considerable likelihood that the seed came from a similar natural forest at the same elevation. Forests on the coast of BC will return to old growth conditions in about 100 years, if left alone.

The photograph shows a forest road on the coast of BC.  There is a strong growth of alder trees on both sides of the road about a decade after the road was built and used for harvesting. Unlike other alder trees, the coastal red alder can fix atmospheric nitrogen in association with root organisms. Red alder functions in coastal ecosystems to colonize areas of soil disturbance. It can get nitrogen from the atmosphere, so it can grow on bare mineral soil with little or no nitrogen. In nature, it goes to work on a landslide or avalanche disturbances that leave bare soil behind. When man comes along to harvest, alder goes to work  to stabilize bare soil on cut and fill slopes along roads.

Locally based forest management is better placed to understand and work with the resiliency components of the local landscape. Centralized forest management is more likely to try to impose interventions on the local landscape that are out of tune with local ecosystem functions. Forest ecosystems are complex and sometimes even resiliency can be a mixed blessing. Red alder with its ability to fix nitrogen has been used by European foresters for benefit. Red alder has been mixed with other trees on nitrogen poor sites to increase the growth of all the trees. If you look at the immediate foreground of the photo above you will see a Scotch Broom plant. It is an alien invasive species from the Mediterranean. It has invaded some rare plant ecosystems such as Gary oak and it can crowd out other species and become a fire hazard. Its function in its native ecosystems is to colonize and vegetate bare mineral soil and it has also got the ability to fix atmospheric nitrogen. It has the same ecosystem function as Red alder but in a different ecosystem.
It has found its place in a BC ecosystem by doing its job. It has found employment and eradication is no longer a real option. Red alder will remain to compete with the new species.

While BC has a few problems with the resiliency of alien species, resilient native plants prevail in BC's forest ecosystems even after disturbances of forest road building and harvesting. To sustain indigenous forest ecosystem conditions in the long term, BC needs to move toward  more devolved and local system of forest management.

Posted by Andrew Mitchell at 2:55 PM