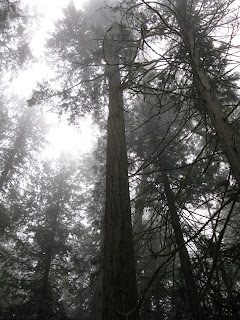 Mountain lions, bears, woodpeckers, ravens, owls are some of the animals found in BC's coastal rain forest. An old growth forest can be quite dark on a rainy day in winter. Some less illustrious creatures go about their business in this moist environment. One of the most common creatures is Ariolimax columbianus, the banana slug that feeds and helps to breakdown living and dead material.
http://www.walnet.org/stanley_woods/slugz/bananaslug.html   Recycling of organic matter is a major task on the coastal rain forest. The banana slug is a very large slug but we give it little attention. Most of the others engaged in recycling are much smaller in size often a millimeter or less. Collembola are some of these tiny organisms, usually found in the soil, but there are also some working high in the canopy of these old growth trees. http://www.collembola.org/

Parks or protected areas are intended to be reservoirs of of diversity. My volunteer work of rebuilding trails in the park gives an opportunity to observe people. Most are very polite Canadians that thank you for improving the trail. Some are even ecstatic that the removal of tripping hazards will enable them to look at the park instead of their feet as they hike. The encounters with Homo sapiens are almost entirely pleasant. Rare encounters with the eco-fanatic human run a different course. The first indication is rather concentrated staring. They seem to see a Viking helmet with horns instead of my old toque. They have encountered an Eco-vandal. Usually a hyperventilating rant ensues.

The large slab of rock that has been blocking the trail for years has been moved off the trail to the side with some effort because it weighs several hundred pounds. It has been moved carefully so the moss has not been knocked off the surface. In the process the rock has been rotated about 60 degrees. An obstructive hazard has been moved two feet off the trail. The rock looks the same to me as it did when it was almost blocking the trail. However to the fine sensitivities of the eco-fanatic it is now a major aesthetic impact on the park. A vituperation ensues worthy of a philistine that has just taken a sledge hammer to Michelangelo's David.

Parks are full of diversity


Posted by Andrew Mitchell at 4:21 PM