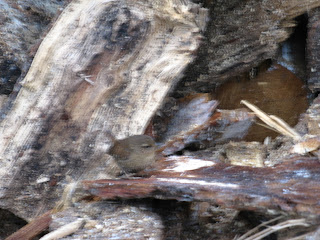 The Bushtit (Psaltriparus minimus) is the smallest bird found in the coastal forests on the southwest coast of BC. It is about 2 inches long and it is found in hedges and in ground vegetation in the forest. The Bushtit is found mainly in western USA and Mexico. It is a very active bird with a high metabolic rate. It seldom stands still long enough to get a good photograph. The Bushtits of the BC coast are mostly brown in color rather than the gray bird shown in bird books.

Last week brought freezing temperatures and snow to southwest BC. A small bird should be most disadvantaged in freezing conditions, but the bushtits seemed to be getting enough food. Larger birds were experiencing difficulty.

Bushtits eats insects and spiders. Many were attracted to a newly opened pile of firewood. Occasionally they would get a good sized beetle but most of the time they pecked in the bark dust eating creatures not readily visible to the human eye. In an old growth forest,  bushtits were busy working in ground vegetation that was pushed down by snow.

The secret to the survival of the Bushtit in south west BC seems to be abundant organic matter. The mainstay of their diet are the small almost invisible creatures that break down the organic matter.
Posted by Andrew Mitchell at 9:35 AM

Email ThisBlogThis!Share to TwitterShare to FacebookShare to Pinterest
Labels: Biodiversity