Clear cutting in BC: A Silvicultural System? 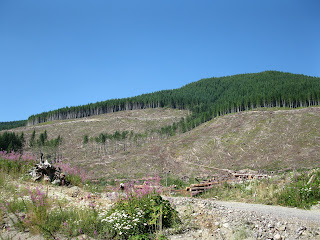 Strong reactions against clear cutting have been around British Columbia for decades. The subject continues to surface in "letters to the editor". The forest sector and the professional forester community responds by pointing out that clear cutting is an acceptable silvicultural system. It is a situation where a good section of the public has got the sense that something is not quite right. The forestry sector has brushed it off as a lack of understanding.

Is there a problem and can it be solved?
A silvicultural system is the process by which forest stands are tended, removed and replaced by new stands. Three elements of forest stewardship are involved:

Regeneration is a requirement after harvest in the public forests in BC so clear cutting meets the first element of forest stewardship for a silvicultural system. Since BC has a poorly developed secondary wood products manufacturing industry, the form and quality of timber to be produced receives little consideration. Aiming for higher quality timber provides an impetus for mixed stands, thinning and the use of non clear cutting silvicultural systems.

The third element of forest stewardship is the idea that the silvicultural system is being applied by a knowledgeable professional or management system to ensure the sustainability of the timber producing and environmental protective functions of a forest landscape. This element of forest stewardship is barely possible under BC's arrangements for industrial forest management in public forests. The BC Government sets the amount of timber that can be harvested annually from Timber Supply Areas that are regional in size. Forest corporations with allocated timber harvesting rights propose the areas to be harvested. A single forest landscape within a Timber Supply Area can see considerable or complete harvesting within a decade or two so clear cut stripping of a considerable part of a forest landscape can take place in a relatively short space of time. The centralized system of the BC Government and its corporate forest company partners simply does not apply stewardship at the local scale. Non clear cutting silvicutural systems are not a one time effort. The harvesting and regenerating activity is spread out over years or even decades and requires much greater local knowledge and skill. A very minor amount of non clear cutting has been attempted in BC. Provision for constant local stewardship is necessary for advanced stewardship. The centralized system involves the BC Ministry of Forests in flux from constant reorganization and downsizing and forest companies subject to take overs and various forms of reorganization.

Ensuring that the protective functions of the forest landscape are maintained features in the negative. Anything that may interrupt the usual cycle of industrial clear cutting is called a constraint. A battle may ensue over clear cutting of a winter wildlife habitat. Usually it is either clear cut or save, rather than application of a shelterwood or selection silvicultural system that may be better for wildlife and people in the long run.

On the BC coast, continuous clear cutting of old growth has left forest industry with problems in the economic harvest of second growth. While the annual growth of timber in young stands meets the projections made in some centralized bureaucratic penthouse, the total volume of timber in a stand on steep terrain may not be sufficient after 70 or 80 years to cover the high costs of harvest with cable logging machines.  In the interior of BC, leaving huge areas of lodge pole pine to get older than 80 years made $100 Billion worth of timber susceptible to mountain pine beetle attack and there has been a major loss of timber.

Clear cutting in BC does not meet the definition of a silvicultural system. Clear cutting is the low cost harvest method suited to the system of industrial timber management that was implemented after WW II in BC.  The system is an economic and environmental failure. The public picks up visual clues from a landscape that something is amiss with forest stewardship. It is not clear cutting as a silvicultural system that is the problem but clear cut exploitation of their public forests, by a legal and institutional framework that enables corporate rapacity rather than true stewardship.

The solution is to change the legal and institutional framework for managing public forests. Public forests should be managed directly on behalf of the public at the local scale with a professional staff that can develop the local knowledge and skill to implement all forms of silvicultural systems. Local forest trusts should be able to sell logs on an open market to encourage the growth of value added manufacturers. A demand for higher quality timber to generate value will encourage use of non clear cutting silvicultural systems. The environmental and aesthetic qualities of local forests will be maintained and provide a basis for the development of nature based non consumptive economic activity in forest dependent communities.

Posted by Andrew Mitchell at 3:07 PM