Volunteering in BC Parks 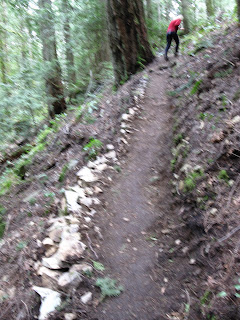 Over the past four winters, I have volunteered by rebuilding the trails in the local Provincial Park.  I worked to remove projecting rocks and other tripping hazards on about 12 kilometers of trail. At the start of the maintenance, an informal survey of 40 regular hikers found that 37 had experienced a fall causing an injury in the previous year while hiking on the trails. After the trails had been rebuilt, only one regular user out of 40 had an injury in the previous year and that was due to snow and ice. Hikers can look at the park while hiking rather than their feet.

The maintenance work that reduced the rate of injury was intended to move the trails into compliance with the 4 inch by 4 inch rule or specification for the tread or walking surface of the trail. Most Parks jurisdictions try to follow this specification which states that there should be no rocks bigger than 4 inches within the top 4 inches of surface material on the trail tread. The reason for the rule is that finer material wear away around larger stones and they start to project and become a tripping hazard. BC Parks does not have any specification for the surface on tread of most hiking trails.

When the work on the trails in the Park was completed in January 2012, the Parks Official asked me what I would substitute for exercise. I pointed out that my .75 acre vegetable garden cultivated only with hand tools and the 50 tons of horse manure carted in a wheelbarrow from the stables a good distance up the road was probably enough for a start. BC Parks is trying to encourage volunteer stewardship and I could see that he was fishing for another volunteer contribution.

The next provincial park in the vicinity is a much larger one on a unique landscape, acquired in the 1990s. Its trails are a haphazard network of old logging roads and connecting trails that are in a state of disrepair. Since the trail route corridors take detours in the landscape, users have pioneered other tracks. The management plan for the Park completed in the 1990s recognized the need for some planning work on the trail system. There has been no progress since then, presumably due to lack of funds.

I offered to organize a sustainable trails project for the Park. The project would have three stages:


The project outline needed a list of survey supplies need to start the project. Excavation in the storage closets around the house unearthed my forest engineering instruments. I was pleased to find my sighting compass and clinometer, but unfortunately the passage of time had caused problems in the liquid filling in both instruments. Neither one could supply the accuracy needed for the survey.

A compass and a clinometer was added to the list of survey supplies. BC Parks did not have the instruments, so new instruments need to be purchased. The Parks official is doing his best to find a few dollars from a tight budget. I have found two volunteers to help with the survey stages. The project remains on hold for want of $275 dollars for necessary survey instruments.

Postscript. Funding and approval for the project came in mid May 2012.
Posted by Andrew Mitchell at 2:53 PM

Email ThisBlogThis!Share to TwitterShare to FacebookShare to Pinterest
Labels: Parks