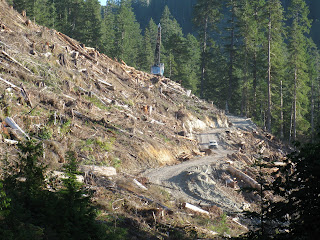 An Anglican Bishop was talking to another man at a social event and said "I was born and Anglican, I have lived as an Anglican and I will die an Anglican". The other man replied "If we were both born Hindus we would be both living and dying as Hindus".   The other man meant no offence but was merely trying to point out that we are all immersed in our background or mindset. The Anglican Bishop beat a hasty retreat.

Agriculture is the underpinning of civilization. Our manipulation of the earth gave us surplus food and time to devote to other things like permanent buildings, cities, power structures and government, art and music. You could expand your horizons by increasing your agricultural base, including adding your land area by conquering and displacing other people through war. Human beings like to be at the center of things and in control.

Where do forests fit into human mindset of civilization? To make fields for growing food, you have to cut down forests in many parts of the world. Clear cutting is as old as agriculture. Agriculture is relatively intense and it is about control and simplification. The field contains a crop of a single species, with efforts made  specific to that species to ensure a crop in one year or season. Agriculture has the geometry of simplification, straight lines, defined boundaries, squares and rectangles. Sane people pursue similar geometric lines in an almost obsessive compulsive attempt to maintain order and control in their gardens. It all considered normal but what of happens to the forest when faced with this mindset. The forest is organic and complex and there are few straight lines in the untidy world of an indigenous forest.

In addition to cutting down forests to make way for fields, we went to the forest to get stuff. The stuff in the forest was once probably more important than it is today. Wood was the main source of fuel before coal and oil. Wood remains a major building material, but it was once one of the leading strategic materials for the conduct of war. Wooden warships needed lots of big pieces of wood. Cannons and explosives were not the first war device to break down massive castle walls. You just needed a good long strong tree stem to form the centerpiece of the counterweight trebuchet, a siege engine that could throw a 300 pound boulder at 120 miles per hour at your neighbor's castle wall.

Humans had at least a couple of thousand years of history in the business of removing or debilitating forests, before we tried to help them with forestry. Civilization does progress after a fashion. In some parts of the world we have managed to achieve better human rights but we have weapons of mass destruction. Modern forestry emerged when Europe started to rehabilitate forests. This was the late 1700's, when the modern era was underway. Humans were armed with agricultural abilities and a new idea that reason and science would give us all the answers. Humans were on a march with greater certainty that we could control everything to our needs.

Modern forestry started with a mindset of agriculture, reason and science and a sense of certainty that we were in control. Agriculture is hugely dependent on the complex workings of minerals, organic matter and micro-organisms in the soil. We are just starting to appreciate that our ignorance of soils is greater than our knowledge. We started to fix forests with agriculture, reason and science.
Early forest management followed the agriculture model, with fields often of single species of trees that were weeded, tended, and clear cut. Trees are plants and will respond to an agricultural regime to some extent. There was some success but some failures. In the late 1800's some European foresters developed and understanding that the simplified agricultural model of single species and clear cutting was inadequate for managing forests. Non clear cutting systems involving a considerable variety of shelter wood and selection silvicultural systems were developed. The underlying idea was that forests were best managed more along the lines of the natural workings of indigenous forests. "Work with nature or you will be defeated." These ideas departed significantly from the idea that humans were in control and could achieve total efficiency.

We are now aware that were are at the end of the modern era. Science and the quest for efficiency in our unquestioned use of the earth's stuff with continued growth is not sustainable. We are entering an new post modern era that is ill defined. We do not change our mindsets easily. The European foresters that developed non clear cutting silvicultural systems were ahead of their time in developing a practical post modern approach. Unfortunately, the practice of forestry is not just a technical matter. It is embedded in society, its ideas, politics, laws and institutions in place to provide for forests.

In a technical and practical sense, forestry was ready and able to move ahead into a post modern era of forest ecosystem management in the 1880s. Progress was hindered by societal and historic forces. America started to take the lead over Europe in the Twentieth Century. American foresters rejected the natural approach that included non clear cutting silvicultural systems. One of their main reasons was that there were more natural forest fires in North America that needed to be controlled.  Also, the other systems seemed to involve considerable fiddling around. American production lines were taking modernism to new heights by supplying automobiles and other appliances. A kinder gentler type of forestry had little place, as America went on a binge through its seemingly abundant and unending forest resources. Forest harvest left a trail of ghost timber towns and progressive forces started to ask for National Forests and Parks to help protect the remaining forests and wild places in America.

Gifford Pinchot, an American forester championed the establishment of the American National Forests. The idea was that the government as a perpetual steward and trustee could do a better job than the timber company. The US National Forests were established out of more distant remnant forests that had not yet fallen to the axe and saw. The largest and most contiguous public forests established on Pinchot's advice were in BC Canada. A BC Royal Commission on its forests in 1909 came out in favor of BC retaining its forests in public ownership for the long term benefit of its citizens and communities. The commission sought Pinchot's advice and it probably was a major influence in the recommendations to retain the forests and establish a BC Forest Service.

The American National Forests and the BC Public Forests were set up to provide a higher type of professional forest management. This objective was never realized and in the late Twentieth Century frictions were developing over clear cutting of forests and turning them over to industrial forestry. Given the predominance of clear cutting and few examples of progressive forest stewardship, the public saw salvation in the establishment of parks and protected areas. The public got more parks especially in BC. Parks and protected areas are a necessary part of sustainable forest management. However in the political view, the creation of more parks that the public wanted in BC, was taken as license for an even harder form of industrial forest management in public forests used for timber production.

Civilization has got stuck in ruts often for centuries owing to unwillingness to change the prevailing mindset. Forests will probably fare better when we cease to see ourselves at the center, intent of making use of everything to the maximum to meet our needs. Humans have made major changes in the past when it has become necessary.

Posted by Andrew Mitchell at 5:27 PM