Clear cutting: What does the eye see? 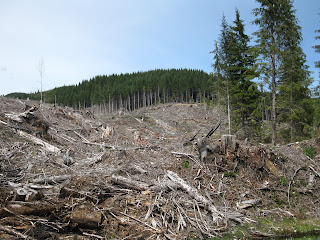 Clear cutting has been a flash point in British Columbia. Environmental groups, urban dwellers react negatively to clear cuts in the forest landscape. There has been friction and noise about clear cutting for about 40 years. Every time the issue surfaces,its gets played out the same way, something like a bad commercial on the TV screen:

Logging is a mainstay of the BC economy. (We need to do it like this or we will be in the poorhouse) This then gets bolstered by scientific and professional advice that clear cutting is an acceptable silvicultural system. Special interest groups, greenies, and urban dudes should get educated and accept these facts.


The interior of BC is about to get hit with a major decline in timber supply in the aftermath of the mountain pine beetle epidemic. It will mean decline in employment.  One of the solutions that has been floated is a relaxation of environmental standards to free up timber in the short term. This is not really a solution but a postponement of the problem. Will the resistors, the greenies and the urban dudes be told to stand down and witness the last whack at our public forests?

If we want to solve the problem, we need to know what the problem is. Technical forestry arguments say that clear cutting is not a problem. The visual expression of clear cutting on the landscape seems to be the spark that gives many the impression that all is not well with forest management.

Forest management on the coast of BC during the last half or the 20th century was one great advancing clear cut that followed the best timber on the easiest terrain on the lowlands, then up the valley bottoms to the mountain tops. Vancouver Island got this treatment from south to north and east to west. The coastal forest sector is now in a very difficult transition.

In the interior of BC, clear cutting was more dispersed in forest landscapes. The motivation was the same as on the coast, but the best stands of timber were more dispersed. Some of the forest ecosystems in the interior of BC are fire dominated. Sometimes, the better stands of timber were found on sites that were more sheltered from fire owing to topography, aspect or moisture. Lodge pole pine was the species that grew on sites where fires returned frequently. In these landscapes, industrial forest management involved forest corporations logging the best timber and government fire fighting efforts often saving Lodge pole pine in areas where fires returned frequently. Other species were more profitable than pine so insufficient pine was harvested. Huge areas of pine got old as other areas were being clear cut. Pine becomes susceptible to attack by mountain pine beetle at 80 years old so the accumulation of huge areas of old pine set the stage for a super epidemic. BC  lost $100 Billion in timber by clear cutting in the wrong places. What about all the public funds spent over decades to build a huge habitat area of old Lodge pole pine for mountain pine beetle?

What was the motivator for the problems on the coast and interior. Simply it was clear cut the best timber. BC's legal and institutional arrangements for management of its public forest are really arrangements to allocate public timber mainly to forest corporations and leniently enable them to harvest the best timber by the least cost means to return the most money to corporations and the government. That means clear cutting. When the greenies and the urban dudes saw something wrong in the clearcut they were merely getting a visual impression on the landscape of a poor arrangements for managing public forests.

The solution is to revamp the legal and institutional framework for managing public forests. Future prosperity of forest dependent community requires a new system where forest stewardship takes priority.  We will not fix the problem with more of the same. We cannot clear cut our way out of the problem. See labels: Local Forest Trusts and  Forest Trust Assembly
Posted by Andrew Mitchell at 3:30 PM