The sustainable and safe trail

Specifications of trail users: The human bipedal hiker walks with a flowing motion on gradients up to approximately 10% gradient (one up in ten along). On gradients above 10% the flowing motion is replaced by climbing steps that direct greater force into the ground. Depending on the cohesion or how well the soil material in the trail surface stick together, the climbing steps start to dig, loosen and erode the surface. Most hikers prefer trails that provide the marching flowing motion rather than climbing steps. On hard rock surfaces, humans can walk up gradients of 100%. Humans fall over with ease, and muscles from the feet all the way up through the body core and head, shoulders and arms work to maintain the delicate balance. Roots, projecting rocks in the trail tread or surface can undo the delicate balance.

Horses are much heavier than humans and their iron and steel shoes can chew up a trail surface. Gradient control and reduced maximum gradients are needed to accommodate horses. The same applies to mountain bikes. Braking can erode and damage a trail surface.

The physical sustainability of a hiking trail is affected by the inter-play of the following in the landscape:

Unlike roads, trails seldom are supplied with ditches and culverts, so the issue of water control and trail sustainability is very important. It is easy to envision water flowing down a steep trail gradient causing substantial erosion. Yes, this does happen and is a problem. Water flow on a trail can be a problem as it moves through the topography in the landscape in some unexpected places. On smooth uniform gentle side slopes of 25% or less a trail can make the only crease in the surface and catch water. Trail gradients on such gentle slopes should have a gradient of one quarter the gradient of the side slope. Steeper side slopes are often more irregular in micro-topography and a combination of out sloping of trail surfaces and the incorporation of gradient breaks or dips can be effective in directing water from the trail surface.

Most forest landscapes have rather elusive water springs, intermittent seasonal streams or topography that tends to draw and direct water. Some of these spots, even appeal to the inexperienced trail locator as a good way to go. A considerable water supply at a storm event and a steep trail gradient can be a recipe for a major rapid erosion event. Erosion on a forest trail in a protected area or park can match the scale of an erosion event on a forest road in a timber producing forest. 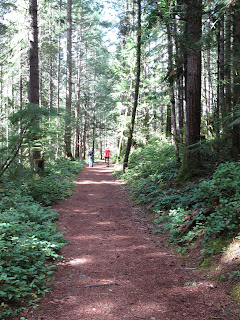 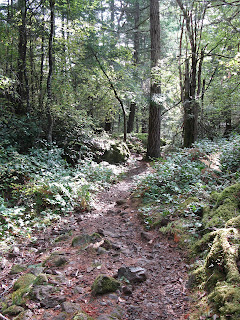 The trail on the right is unsafe but it is not unsustainable. It has a gradient of under 5% and has not been subject to erosion by water. It was constructed with no regard to a standard for the tread or walking surface. Most Parks or protected area jurisdictions follow the 4 by 4 inch rule: No rocks greater than 4 inches should be within 4 inches of the surface. Foot traffic will rub away smaller finer material surrounding the rock and the rock projects up from the trail and becomes a tripping hazard. This is perhaps the most important rule in trail construction. This rule has seldom been followed in BC. Coarse soils, or soils with a good measure of rocks and boulders are most common on the hills and mountains of BC. A trail built without regard to the standard of the tread in these soils ends up unsafe. Trail construction in some of BC's protected areas was done under the notion of light foot print and minimal disturbance. This idea seems to be favored by some ecologists but the end result is a heavy foot print. The trail in the photo widens in the foreground where several large rocks are exposed. Hikers choose different routes around these obstacles and cause the trail to widen and the foot print increases. Unsafe trails with many tripping hazards are not attractive to hikers because they have to spend most of the time looking at their feet rather than surrounding nature.

Unsafe trails in coarse soils can be maintained and improved. However, it often involves a rebuilding effort greater than initial trail construction to achieve a result that is less satisfactory than having built the trail properly in the first place. The necessary fine soil materials have been lost from the trail

Posted by Andrew Mitchell at 4:11 PM