The BC Legislative Committee on Timber Supply has completed its report entitled "Growing fibre, growing value".
Read the report at: http://www.leg.bc.ca/cmt/39thparl/session-4/timber/reports/PDF/Rpt-TIMBER-39-4-GrowingFibreGrowingValue-2012-08-15.pdf

The Committee of elected representatives went to the effort of travelling the Province to take advice about the problems in BC forestry. It has summarized the advice and developed recommendations. The process was thorough and effort was made.

Unfortunately, the whole process was parochial since it examined symptoms within the BC public forests box, and proposed a line of solutions. This was not entirely the fault of the committee because most of the forestry folk that showed up to give advice were in the same box. "You cannot solve a problem until you know what the problem is".  The Committee owes its existence to the mountain pine beetle epidemic that will reduce timber supply in the central interior of BC for decades. The outbreak was larger than a normal natural event. The committee did not prod into the causes of this outbreak and seems to accept the broadcast view that it is a black swan event caused by climate change.

The Committee had two ex-Chief Foresters or the officials in charge of setting the level of timber harvest. These advisers probably had a hand in one of the main recommendations aimed at finding some additional timber supply. There is potential to find additional timber from marginally economic forest stands. To create incentive to harvest these marginally economic stands, allowable harvests could be "partitioned".  This is the jargon for identifying a volume of timber that can only be taken from marginally economic stands. This is an administrative technique that Chief Foresters can and should exercise.

If Chief Foresters of the Ministry of Forests from about 1960 had consistently required lodge pole pine to be harvested by partitioning in Timber Supply Areas in the central interior, large areas of the species would not have become old and susceptible to mountain beetle attack. Probably some outbreaks would have occurred but a mega- outbreak involving the loss of $100 Billion in timber could have been avoided. Why was this not done? The answer gets you to the root problem that needs to be solved.

After World War II, BC wanted money and economic development and turned the harvest from its abundant public forests over to a few forest corporations, essentially turning the BC forest industry into a Government supported oligopoly. This is why we are burdened with discriminatory wood export tariffs. Oligopolies support oligarchy or a system of a few big feeders at the top that need to get fed. The supply of public timber was done on a very lenient basis and our forests and forest dependent communities are now suffering.

The elephant in the room is the whole mindset to needing to feed forest corporations with our public forests. It is not bringing long term prosperity to BC. One of the main problems with the committee's report is that it opens up new feeding opportunities in our public forests. The idea of area based tenures and encouraging private investment set up the future for enclosure of public forests into the private interest. The title of the report " Growing fibre, Growing value" is an oxymoron. If you think of wood as fibre, you think of wood fibres in paper pulp or some low value commodity wood product. Value in wood is usually about some product that demonstrates the natural aesthetic qualities of wood. 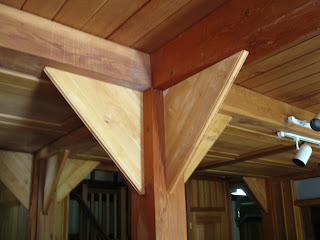 The Western Maple brackets joining Douglas Fir beams in this timber frame house is about adding value to wood. The oligopoly holding most of BC's public timber supply is mainly into commodity wood products and there has been little timber supply to value added manufacturers.

We are not going to solve BC's forest problems with the type of thinking that caused the problems in the first place.


Posted by Andrew Mitchell at 2:51 PM