Land Use Planning in BC


A greater part of British Columbia is public lands. Strictly speaking they are Crown Lands held by the Province. The BC Government is supposed to be the the trustee of the land for the benefit of all the people. Aboriginal people certainly did not see much benefit from the trustee for many decades, and legal persons in the form of corporations seem to have had the icing off the cake.

Land Use Planning is needed to decide what areas are going to be timber producing forests and what areas are going to be Parks or protected areas. Land use planning exercises have often involved the public, environmentalists and interest groups. There is nothing wrong with that either, but there is a political element in these exercises. If environmental or interest groups are part of making these higher level planning decisions, they feel appeased and part of the solution. Within Parks or protected areas and timber producing forests other zones may be identified and higher level planning objectives are developed. There is nothing wrong with this approach. Wildlife habitats have been identified on some plans that follow through with some good habitat protection.

Environmental groups have put a lot of effort into some of these plans. Generally, everyone seems to think that it is effective. However, it can end up being less effective than advertised. In timber producing forests, the Government or its agencies will lead these land use planning processes. However, it is private forest companies that will implement something on the ground to meet the objectives. They do this under short term piecemeal forest plans that may only cover a small part of a zoned area with objectives. If the plans propose something that seems to provide something toward the sometimes vague objectives, then it will probably get approved. Over time a few more plans may get approved in the zoned area without assessing the effectiveness of previous measures in the area.  In the general muddle of events over the long term, the objectives may not be realized. 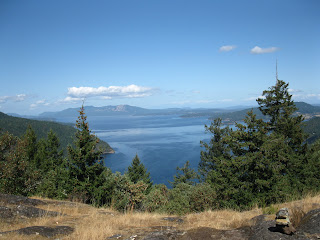 Environmental groups have put so much effort into saving forests as parks or protected areas that these areas go to " heaven" and few questions are asked thereafter.  There are also land use zones within parks or protected areas. Special feature zones with sensitive environments or sites are placed next to the holy of hollies and objectives are often aimed at prohibiting, restricting or reducing human access. The photograph above is the one good viewpoint on a 6 kilometer trail in a Park the follows a fiord. The trail seems to meet objectives by keeping people away from sensitive sites that provide better views than the one above. Unfortunately, almost all of the regular users go off the designated trail and find other ways to get to these additional viewpoints. The actual result is an increasing amount of random visitation in an area zoned for minimal human movement. There is even erosion on some of the un-designated paths. Rather than trying to keep people away, the objectives could have been realized by providing a good trail to these other viewpoints. The total disturbance is less than that caused by random access.

Higher level planning objectives have to be followed by adequate design or they will not be realized.

Posted by Andrew Mitchell at 3:41 PM