Clear Cutting: An institution in BC 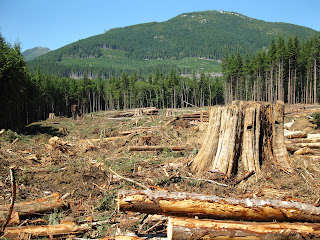 Clear cutting in the public forests of BC is an institution. Public forests are managed under a scheme of timber harvesting rights allocated mainly to forest corporations. A right to harvest crops from some one else's land is called a usufruct and was developed by the Romans. The productivity of the land usually goes downhill under this arrangement because the the rights holder has  incentive to exploit the land. In the case of public forests a timber harvesting right will point the holder to the lowest cost type of harvesting and that is clear cutting. Other silvicultural systems such as shelterwood or selection systems require the harvest to be extended over several sequences that may cover several decades. This requires continuity of local forest management over the long term. The system of harvesting rights is geared to short term forest plans of five years or less so attempts at non clear cutting silvicultural systems are almost doomed to failure.

Other factors led to clear cutting. The coastal rain forests of BC had huge trees that posed a physical challenge. Trees were over 200 feet high in some cases and the large mass of a coastal old growth tree will damage other trees on the way down. The old large stump in the photo above was a virgin Western Red Cedar tree from the previous harvest of a virgin forest. The tree was cut before the days of the chain saw. The two notches in the old stump held spring boards or planks with a metal wedging device that went into the notch. The tree was cut by two men standing on the spring boards and pulling on a cross cut saw. It was less work to saw the tree above the fluted base.
A non clear-cutting silvicultural system in virgin coastal forests would have required a strip arrangement with strips at least as wide as the height of the trees to enable falling and yarding by cable logging equipment. Two times tree height enables wind to get down to the ground and damage the edge of the uncut forest. Managing these strips over time to reduce or prevent wind damage losses would have required some very detailed long term planning. This would have been beyond the mindset of BC forestry 50 years ago, and sadly remains so today.

Clear cutting is sometimes the best silvicultural solution for some sites. If the site is infected with root rots, clear cutting is usually better than partial harvesting. There is also the issue of fire dominated ecosystems. The coastal rain forests are not fire dominated, but natural disturbance by fire is a feature of considerable area of forests in the interior of BC. Fire is a catastrophic disturbance, similar to clear cutting in many ways. Over the years, there has been considerable debate over the differences. The main difference is that a fire will leave an area with more length of forest edge because fires tend to burn out in fingers rather than the straight edges of a clear cut.  There is probably a little validity in the notion of early North American foresters that fire dominated ecosystems needed different treatment. In some cases, clear cutting is most appropriate in these ecosystems.

European foresters were the first to take a closer look at fire dominated ecosystems. In Finland, foresters noted that the frequency of disturbance or the return frequency of fires varied considerably in these landscapes. The variation was associated with topography. Low moist sites had older forests, more biodiversity and different species than hill tops and plateaus. Areas with frequent fires had a species suited to colonize and reforest the burnt over areas.  In BC, the species that does this is Lodge Pole Pine. Its cones open after the heat of a fire and the tree grows vigorously but is short lived. If it does not get burnt after 80 years, mountain pine beetles will dispose of the stand often in a catastrophic fashion.

Instituted clear-cutting to enable forest corporations to have a profitable time exercising their timber harvesting rights in BC's fire dominated public forests in the interior of the Province played out with a rather peculiar twist. The BC Forest Service built some of the main forest roads after WWII to enable development of the interior. That assistance was followed by a scheme that enabled forest companies to build main roads and subtract the cost from their bill from the Province for harvesting wood. The companies also got a favorable rate for the logs that they removed from the road right of way. This played out as a high grading subsidy on the ground. A subsidized main forest road on the rolling terrain on the interior plateau often had a few slightly peculiar characteristics. On a dry hump with lodge pole pine forest the road right of way would be of minimum width and then widen considerably as the road descended through a dip in the topography where there was more moisture and other species. The first harvest blocks would appear on these moist sites. Clear cutting was the norm, although some of these could have been candidates for non clear-cutting to maintain biodiversity. Mean while the drier lodge pole pine stands that were candidates for clear-cutting were avoided. The expiry date of 80 years on lodge pole pine was forgotten. Huge areas of forest got beyond the expiry date and the mountain pine beetle had the habitat for a binge. The binge amounted to a munch valued at $100 Billion.

Clear-cutting is not bad if it is appropriate for the conditions. BC forest harvesting is almost entirely clear-cutting because it is the low cost enabler of corporate timber harvesting rights in public forests. Corporations have taken the profits and the public bears the losses of Billions of dollars for feeding pine beetles, reduced economic viability of forest dependent communities, and reduced economic, social and ecological value of our forests in the long term.
Posted by Andrew Mitchell at 4:39 PM