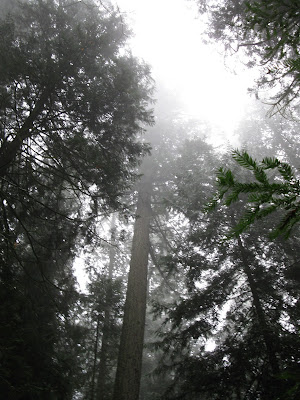 Old growth trees stretch skyward into the fog on a wet winter day in BC's coastal rain forest.  The foliage of a Pacific Yew tree in the under story can be seen on the right hand side. This is a small patch of old growth in a BC Park, a few kilometers from Victoria. It remains for a couple of reasons. It is situated in a little north facing valley on a hill and this location protected it from a fire that burned down the forest on the hill about 100 years ago. It was private land that was purchased by a cranky individual named John Dean. His gravestone in Victoria includes the message:
"It is a rotten world, artful politicians are its bane"
He had a cabin near the old growth and to outwit politicians or any future owner that would clear cut the grove, he donated the land to the BC Government as a park. His legacy remains.

Human ecology or human decisions often represented by laws and institutions have considerable impact on the future state of a forest. While environmentalists often like to think of forests as some sort of steady state equilibrium, they are usually in a state of constant change. Natural or man caused disturbances can put a forest or a different path through time. Most of BC's forests are Crown or public forests under the trusteeship of politicians in BC's Legislature. They have been plying their art on BC's public forests for a century. Was John Dean's view of the political element correct? Let's look back on their performance as trustees of our public forests over the past century.

There have been a few Royal Commissions on BC's forests in the past century headed for the most part by non politicians such as judges or university professors, but the one that appears to be most visionary and enlightened was headed by a politician named Fulton. His 1909 commission recommended that the forests of BC be reserved in public ownership and be managed by an independent forest service. A healthy forest industry and sustainable forest dependent communities was the intended outcome. We are inclined to give this politician ten out of ten for contemplating sustainable forest management almost a century before its time.

However, all is usually not what it seems with politicians. The forests of USA had suffered at the hands of clear cutting robber barons that left a legacy of waste and ghost towns. There was a progressive movement in USA and Gifford Pinchot was leading the effort to establish National Forests and a US Forest Service to conserve remaining forests. Fulton's commission came up with the same idea for BC in the form of a public forest reserve and a BC Forest Service. The concept was easy to implement because land was reserved for the Crown under the British Colonial system. The fine print in Fulton's report indicates the Fulton visited Gifford Pinchot on two occasions during his commission. Fulton was a good politician that searched around for the best innovative idea and sold it as his own. The public forests of BC were the brainchild of Gifford Pinchot.

Pinchot viewed the timber industry in the forests as a fox in the chicken coop. His idea of a forest service in public forests was to replace timber interests with professional forest managers. The Fulton report also espouses this concept. Pinchot was disturbed that the US Forest Service degenerated to a fire fighting service that protected timber for clear cutting by timber interests. In BC, there was a similar trend, only it went further. Long term timber harvesting rights were granted to forest companies that would build sawmills and pulp-mills after World War II. The Forest Service's engineers helped by building main forest development roads to open up forests in the interior of BC. Another major effort by the Forest Service was in forest inventories. These were intended to assess the forest resource, but also aided forest companies to target and harvest the best most profitable timber.

Since World War II, more and more forest management responsibilities have been shifted to forest companies. This trend has escalated in the past decade. The original notion of public forests being managed by an independent professional forest service has been substituted by the concept of professional reliance. Registered professional foresters working for forest corporations are supposed to see to the public interest. A gradual or stealth privatization has been underway in BC's public forests for more than 60 years under a tenure system of timber harvesting rights.

The tenure system of timber harvesting rights was an expedient way to get rapid expansion of BC's forest industry after World War II, but has it provided the outcome of a healthy stable forest industry and sustainable forest dependent communities? It has not achieved these outcomes. The coastal forest industry and communities has been struggling since easily accessible old growth timber was no longer available. The forest industry in the interior has taken a major long term hit in the form of a major mountain pine beetle epidemic in lodge pole pine stands. While the BC Government and forest corporations have tried to blame the epidemic on climate change, firefighting and failure to harvest enough pine caused huge areas to get old and susceptible to attack. The BC economy has lost $100 Billion to beetles. The allocation of most of BC's public timber to sawmill and pulp companies restricted the growth of secondary value adding wood manufacture in BC. The non market administered prices made BC wood products exports vulnerable to discriminatory export taxes and tariffs. A tenure system of rights to take timber out of public forests can never become a good foundation for sustainable forest stewardship.

BC's forest corporations have clear cut the best timber out of BC's public forests and left forest dependent communities with a bleak future.  Now our forest trustees in our sovereign Legislature in Victoria are set to reward this improvidence by rewarding increased private rights to public forests.
Bill 8, a miscellaneous statutes amendment Act 2013, tries to sneak in a major change to the Forest Act that will enable the Minister of Forests to grant more Tree farm Licences or long term area based leases in public forests. This move will push public forests toward the end stage of enclosure into the private interest while enabling the able politician to insist that the public forest remains in public ownership. The pinnacle of the art of politics: steal most of BC so no one notices.

Forest corporations were enabled by a tenure system that encouraged timber exploitation with tree planting for public relations. Timber interests in the forest did their fox in the chicken coop act. We should remind ourselves that we have public forests because we did not want timber interests managing them. The artful politicians of our sovereign BC Legislature have achieved a milestone of 100 years of failure as trustees of our public forest.

The first place to start toward the next century of stewardship is not a sneak attempt to put our forests further into the private interest. We must ask for some new institutions for the trusteeship of BC's public forests that will put some checks on the artful politicians in the BC Legislature. Devolution of the trusteeship to local forest trusts with elected boards and professional forest management staff would put the reigns in local hands. To ensure that these local forest politicians had some checks and balances, there would be a BC Forest Trust Assembly governed by an equal number of elected and professional delegates from local forest trusts. The local trusts would operate under a sustainable forest management charter. Timber would be sold on an open market and revenue would be generated from non-timber and nature based economic activity. The BC Forest Trust Assembly would audit local forest trusts, provide collective services and act as a court of appeal.

A devolved system of forest trusteeship would go to the grass roots of local communities and would be relatively immune to artful BC politicians attempts to aid and abet the enclosure of our public forests into the private interest. A new system of Local Forest Trusts also provides a fair an innovative solution for First Nations. First Nations could have local forest trusts in a fair and equal system.


Posted by Andrew Mitchell at 2:08 PM No comments:

See the alert at:
http://www.bobsimpsonmla.ca/issue-alert-forest-legislation-to-privatize-our-public-forests/

Posted by Andrew Mitchell at 5:36 PM No comments: