Clear cutting and farming the forest 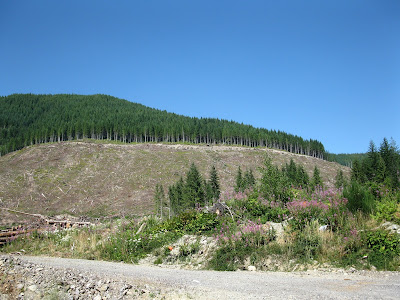 Clear cutting of forests is a hot button issue. Foresters point out that clear cutting can be an acceptable silvicultural system. Forests in their natural state can suffer catastrophic natural disturbances such as fires or wind throw that cause large openings not unlike clear cuts. More clear cutting of lodge pole pine forests in the interior of BC in the last half century would have reduced the severity of the recent mountain pine beetle epidemic.

All clear cutting of forests is not bad, but there remains a strong popular perception that there is something wrong with clear cutting. Probably this at least partly due to an ideal notion of the green forest being defiled. However, when many people get aroused about something and it sticks for a long time, there are probably some legitimate issues.

Forests in their natural state seem to know what they are doing and they seldom do things in straight lines. When the straight line solution of the growth of a conifer tree trunk gets interrupted by some injury or damage nature will produce a great variety of non straight line solutions to get around the problem and keep on growing. When simple humans come along with a power and control mindset straight line solutions become the order of the day. We like to call ourselves civilized. This hypocritical term for ourselves has a lot to do with agriculture, that involves fields and straight lines on the ground. Agriculture, the historians tell us, provided the food surpluses that enabled cities and other artistic and technological endeavors of civilization. Another feature of the long march to civilization was using new gained technological prowess to beat others up and steal their land and resources. Our straight line fixation, and other flaws such as warfare are embedded with farming and cultivation. Farming used to require a lot of people on the land to do the work. Petroleum brought machines that could do the work of an army of slaves. It also brought the ingredients for fertilizers and pesticides. Farming now delights in power and control inputs repeated annually to gain at least one crop in a year. This is often called the "green revolution".

The forests of British Columbia have been going about their business for millennia and the time frame is decades and centuries to complete the growth cycle. The virgin forests had some of the largest and best conifers in the world. If it works well, why should we try to fix it?  European foresters said "work with nature in the forest or you will be defeated". Over 200 years ago European foresters started to restore devastated forests using the farming idea of planting fields of single species of tree that would be clear cut like a crop. More than a few problems were encountered with this approach so a more natural approach was proposed by some leading foresters. The natural approach involved mixtures of tree species and development of non- clear cut silvicultural systems such as shelter wood and selection methods. The more natural approach to forestry is now called eco-system management. The natural or eco approach to forestry probably makes more sense than the farming approach. Farming is a high control, high input endeavor usually intended to come up with a crop in one growing season. If one year's effort comes undone, the farmer can recover in the next year. Forestry is a long term affair and many heavy inputs become too costly if harvest is many years away. Loss of a crop means loss of many years growth. The approach of little inputs with reliance on nature probably makes more long term business sense than trying to push the forest along with lots of inputs. Intensive forestry or intensive silviculture are the present terms for a farming approach.

Our whole perspective and approach to life is bent around farming, and a steroid civilization propelled by mechanical slaves powered by fossil fuels. The mechanical slaves available have reduced the population involved with farming and the food produced get shipped to animal feed lots and human feed lots in cities. British Columbia's population is heavily urban and little interest or understanding remains about rural life on farm or forest. We like to talk about renewable energy. The forest is a renewable energy machine that is efficient at capturing the sun's energy over time. The job does take time and it does not compete with our subsidized fossil fuel sources. The subsidy comes from time or the millions of years that it took to accumulate the fossil fuels that we burn in vast quantities. When our fast fuel civilization bumps up against the natural energy cycle of the forest there is a collision that usually expresses itself on the landscape as a clear cut. We do not like its looks, but we do not want to get out of our fossil fuel guzzling conveyance and walk at the speed of the forest.

The early loggers on the British Columbia coast made big clear cuts but they used nature to help it along. Large tall trees were rigged with guy cables, large pulley blocks. A steam driven winch fueled by wood supplied the power. Logs were moved by cables that were suspended off the ground by the rigged spar trees. After World War II, the time to rig up a logging site was reduced by portable steel spar trees that had the all the pulley blocks welded in place. The under carriage of a Sherman tank was often used to move the steel spar tree from site to site. Nothing like a little war technology to help with clear cutting. Clear cutting is a "brown revolution" in the forest landscape.


Posted by Andrew Mitchell at 3:13 PM