Clear cutting and your house


If you live in North America, the chances are that your house is built out of wood. Before we used fossil fuels as energy slaves and could saw up logs easily, wooden buildings tended to be built out of large sized wooden posts and beams. Wood is a good structural material as well as a good aesthetic material. Large posts and beam structures are more fire resistant than those made with smaller dimensions. 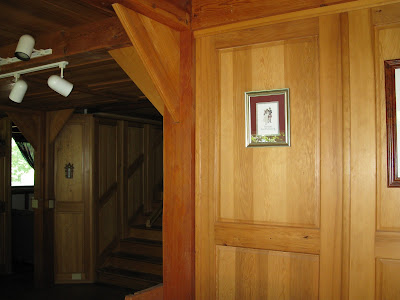 Unlike this house with joined post and beams and wooden panel walls, little wood is usually seen inside the average North American house. The use of wood in North American homes is not so much about wood as it is about being fast. The nominal two inch or five centimeter lumber that makes up the structure of the North American house enables them to be erected with great speed. The wooden structure is covered on the outside of the house by siding or other facing materials that may or may not be wood based. The interior of the house is covered with dry-wall, plasterboard, or sheet-rock. These are all different names for gypsum sheets that are faced with paper based liner board.

The expansion of European people over North America and the need to erect structures and towns quickly made forests a target for ready materials. There were big continuous clear cuts, sometimes with great fires in the wasteful slash that was left over, and ghost timber towns that expired as greedy timber barons moved on to the next forest. Forests were also being cleared to make farms. USA experienced a timber binge in the 1800's that extended into the early 1900's. British Columbia was spared because it was located at the end of the line on the north west of the continent. The creation of the National Forests in USA and public forests in BC was a progressive reaction to that binge.

The first half of the 20th century brought two wars and a depression. There was pent up energy and increased technological progress with improved mechanical energy slaves after WWII ended. There was a baby boom and a building boom. Forests in USA had not fully recovered from the previous binge. There was great demand for stick framing lumber, and British Columbia was able to supply. Much of the lumber came from clear cutting quality timber from virgin forests. It could have been used for higher value purposes than a support for gypsum board. Canada sees itself as a source of raw materials, so we tend to do as little as possible to the raw material before trying to collect the paycheck. We do not seem to be maturing in this respect as we try to sell raw bitumen from our tar sands.

Clear cutting was an unchallenged part of taking high value timber to market as a low value commodity. It fit the cost picture. Most of British Columbia's public timber harvest was allocated to commodity wood producers, leaving no wood for value adding manufacturers. BC locked itself into the low value commodity market for the long term. When forests in USA started to recover from the previous binge about 1980, grumblings about the market share of BC wood started to come from American lumber companies. Administrative prices paid by BC forest companies for public timber became vulnerable to allegations of subsidy and trade tariffs. BC is locked into the commodity lumber model and attempts to sell wood to other markets have also been accompanied by efforts to sell North American stick framing construction techniques.

BC has had laws to discourage export of logs for more than a century. Manufacture within BC keeps jobs in BC. Export of logs has been permitted under special circumstances. There has been pressure for more log exports in recent years. Off shore buyers are able to pay more than BC's commodity mills for the logs. The off shore buyer can afford to pay the cost of clear cutting but the domestic mills cannot afford the cost. Sawmill workers loose potential employment and the issue is politically contentious. Politicians cannot see past the fact that the problem is just a symptom of locking into commodity production and favor increased or decreased log exports depending on political stripe.

Clear cutting is the low cost forest harvesting method that goes with timber supply to the commodity stick framing residential construction market. It is part of the fast pace of modern life. It points to a special kind of intellectual and aesthetic poverty if all the use we find for wood is for nailing gypsum board to make a wall.

Posted by Andrew Mitchell at 3:25 PM

Email ThisBlogThis!Share to TwitterShare to FacebookShare to Pinterest
Labels: Harvesting