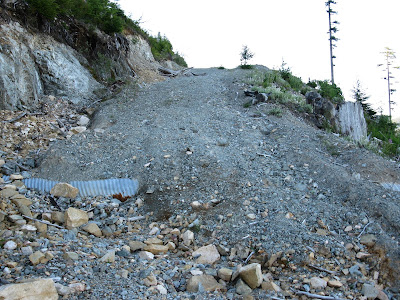 Clear cutting a forest creates immediate visual change. An area of the forest goes from green to brown. This can prompt quite a bit of ranting and raving about the end of all that is good or natural.  In most cases, it is not quite as bad as it looks.

When a farmer turns a field from green to brown by plowing, all the vegetation and soil is turned over. Clear cutting the forest does not remove the stumps and ground vegetation, so there is something left to hold the soil or nutrient capital in place. There are some changes to the soil and its organisms at clear-cutting, but most forest soils recover relatively quickly and stay in place.

The greatest potential problem in a clear cut is the logging roads. Construction of a logging road is a deep disturbance to the soil. It can capture and change water flows in the clear cut. If roads are not adequately drained with ditches and culverts erosion can occur. It water is diverted down a steep road severe erosion can occur. Sometimes landslides can occur on steep slopes that are receiving extra water from inadequately drained roads. Since water is an important factor in erosion and landslides near roads, the soil usually finds its way into streams and rivers to cause additional damage to streams and fish.

Logging roads are sometimes deactivated after harvesting. This involves installation of diagonal water-bars in the road surface to divert water from the road if ditches and culverts become clogged with soil or woody debris. The road in the photograph above was deactivated, but some erosion has occurred. However the erosion is much less severe.

Accelerated erosion on logging roads can continue for decades. Recently, I went with some BC Parks staff on a field trip to examine some trails in a protected area. Unlike most parks or protected areas, this park had been logged about 50 or 60 years ago. A new forest has regenerated naturally and the park has the general appearance of being well on the road to full recovery. The management plan for the park even outlines that it contains one of the highest percentages of high ecological value areas.

Parks staff operate within the ethos of Parks in British Columbia. Parks are areas that have been "saved from the ravages of resource extraction". In most cases parks have been designated in virgin natural areas where no development has taken place. This park is different because it is a recovering landscape. In some respects, the recovery is so good that the park looks and feels like an area in natural condition. Parks staff were attentive to areas of sensitive sites, wildflowers etc and the need to protect them. However, part of the designated trail system in the park uses old logging roads. Park users also follow other old logging roads that are not part of the designated system and trample sensitive sites. Many of the old logging roads were poorly located and built and have been eroding for 50 or 60 years. One section has gradients of 33%, is eroding severely and forms part of the main arterial trail system in the park. In a managed timber producing forest, the road would be permanently deactivated to reduce erosion. Parks staff were rather oblivious to the erosion problem and reluctant to rectify the problem inherited from clear cutting. BC Parks has a mandate to preserve heritage. A heritage exhibition of poorly located and constructed logging roads that continue to erode after 60 years is something we do not need.

Posted by Andrew Mitchell at 3:54 PM