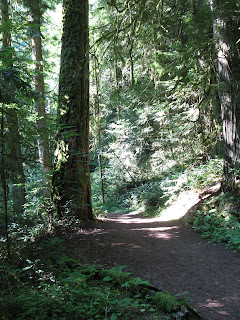 Communities, groups and individuals can get directly involved in their local forests by volunteering to build or maintain trails or other recreational facilities. In British Columbia, most of the forest is in public ownership and there are opportunities to get involved. BC Parks tries to encourage volunteers. There are 13 million hectares of Parks in BC. In addition to parks there is over 20 million hectares of wilderness in natural condition in forest landscapes that supply timber. Over 30 million hectares amounts to an area the size of Germany or Poland.

What are the benefits of volunteering to build or maintain forest trails and recreation facilities? There are direct health benefits to the volunteers through the exercise of walking and working in the forest. The trails enable a community to extend its recreational opportunities out to the forest. This provides recreational benefits to community residents and it can also attract visitors that bring economic benefits. While forest trails provide physical extension of a community out into the forest, they also help to increase community interest in all aspects of forest stewardship. It could help to ensure sustainability of timber supplies. A local forest ethic can be of vital importance to sustaining the economy of a forest dependent community.

Although Canada is identified as a land of forests, British Columbia is the premier forest Province in the country. It is an environment of forests, but forests and a forest ethic are not a strong feature of our culture. Some forested areas in the world have distinctive local architecture often involving big timber. BC has bigger timber than most, but there has been little expression in local architecture. In fact, the forest influence on local culture seems to be declining. A large proportion of BC's population is in big southern cities and diversity in BC's economy has reduced the eminence of the forest sector in the economy. Our large areas of timber producing forests are managed jointly and somewhat centrally by the BC Government and forest corporations. The legal and institutional framework for managing public forests has all but succeeded in taking local participation out of the equation except for a few little opportunities to comment. A gradual handover of increasing forest management responsibilities to forest corporations over the past 60 years means that the public lands of British Columbia are in a process of enclosure into private ownership, just like the common lands of parts of Europe several centuries ago. The forest sector and the government maintains that the setup in regard to forests is democratic.  However, public forests were scarcely mentioned in a recent provincial election campaign.

Community volunteering in forests, particularly in the building and maintenance of trails and recreational facilities makes a strong statement about the value of public forests to the community. Most of all it is a statement for freedom. The public has the right to have access and recreate in 30 million hectares of wilderness. If BC's public forests get gradually privatized, gates will go up and access will be restricted.

To encourage community involvement in building forest trails and recreational facilities, This blog hopes to feature some example projects from BC and other parts of the world. If you are a volunteer in a forest trail or recreation project in a forest or protected area or park, please send some information and especially photographs to: forestwise@shaw.ca
Users of BC parks are also encouraged to send photographs and information on trails in BC Parks. We have had some reports of severe erosion on some trails in BC Parks and the agency seems to have a woefully inadequate budget for trails and maintenance.


Posted by Andrew Mitchell at 2:53 PM