Forest Conservation: Are we progressing In British Columbia? 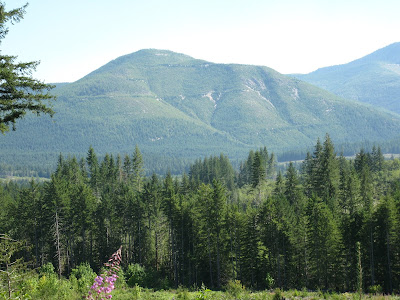 The above photograph is a timber producing landscape on Vancouver Island. All the forest has been harvested and new forest has been established. The tree species composition is similar to the previous virgin forest.  If the forest were to be left alone for 100 years it would develop characteristics similar to the previous old growth forest. Is this then an example of forest conservation? At least to some extent the forest has been maintained in this landscape. Most of this forest will be harvested before it is 100 years old, and problems may or may not develop with short rotations as opposed to several hundred year rotations in nature.

Human caused effects on this landscape are not uniform. The lines of forest roads are visible on the mountainsides. The lines are visible for two reasons. There are visible pieces of erosion along the roads that catch the eye. However, it is the difference in vegetation on the roadsides that delineates most of the length. The forest ecosystem has pulled out nitrogen fixing red alder to rehabilitate and bind the disturbed mineral soil along the roads. The coastal rain forests of British Columbia have considerable resilience and try to conserve themselves against our attacks. Coastal forests have also grabbed an new species to add to the tool box for rehabilitating disturbed soils along roads. It is the alien and invasive Scotch Broom that comes from the Mediterranean. Forest resilience and conservation can be more than a little paradoxical.

The mere designation of parks or protected areas is a simple, easy to understand wrong answer to a complex problem. Politicians understand that they can satisfy the public, at least for some length of time with these simple often politically correct answers. The BC Parks system involves a very large area but it is under funded. Giving forests a sacred designation is likely to produce some systemic problems in the priesthood or managers that will look after the areas. While protected area management does need specialist ecologists that know about sensitive sites species and habitats, it also requires the knowledge and experience of natural resource and forest professionals to ensure adequate protection.

If we return to the photo, and the lines of forest roads in the landscape above, we notice a few erosion problems. However, these forest roads were clearly engineered by foresters because their gradients are controlled and gradual.  Natural drainage flows have been allowed to cross under the roads. These rain forest hillsides are subject to high rainfall storms in winter. Without the attention to gradient control and drainage, the erosive impact on the slopes would be severe. While trails in a park are narrow compared to a road, they are rarely supplied with drains and culverts. If a trail has inadequate location engineering and gradient control it can erode and trigger landslides just like a road.

How can you tell if a forest is being conserved and there is a harmonious relationship between man and the forest? If you know little about trees or ecosystems, just look at the footprint or the quality of the forest roads or trails and you get the whole picture.

Sustainable trails in a park or protected area are often defined as having "a low environmental footprint". This is a good public relations definition that likely to translate to different things on the ground. A  rather literal and often "green" view of the definition will result in a trail that is barely built. As rocks and roots become exposed with the wear of foot traffic, the trail will become an obstacle course of tripping hazards. People will try to avoid the hazards and the trail will widen. Designers of these low foot print trails may stay far away from sensitive sites and deprive users from views and other points of interest. Users may respond by going off trail and trampling sensitive sites. Some of these "green" foot trails give little regard to gradient control and go up and down in the landscape resulting in exhausted users and often considerable erosion. Some conservation agencies end up with big environmental footprints from non engineered "green" trails.

If you add a little forest engineering discipline to the low environmental footprint trail and give attention to gradient control, cross drainage, placement of the trail on the terrain and construction standards, the result is a sustainable trail with a safe tread or running surface.  The forest engineer will give regard to the energy requirements of the machine or person and design a route that does not waste effort. The forest engineer will understand that people do not go into the forest just to look at trees. The forest road is there to get wood and maintain the forest. The forest trail in a park is there to provide points of interest and views. If the trail is interesting, users will stay on the trail and sensitive areas will not be damaged.

The Montreal Process, an international agreement on sustainable management and forest conservation in temperate and boreal forests covers timber producing forests and parks or protected areas. Forest conservation featuring a harmonious relationship between man and the land is needed in timber producing forests and in parks or protected areas. The average timber producing public forest landscape in British Columbia contains forest and alpine areas that will never be suitable for timber production. These areas are natural virgin condition and represent an un-designated parks or wilderness area that is larger than the the substantial system of designated parks. If timber producing public forest landscapes were managed to comply with the Montreal Process definition of sustainable forest management, the non timber harvesting areas would be managed like parks to encourage local nature based forest economic activity.


Posted by Andrew Mitchell at 2:47 PM