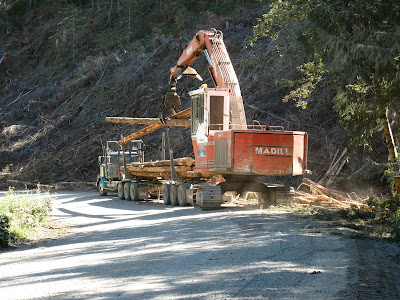 Forest contractors do much of the work in the forests of British Columbia. Forest contractors come in many shapes and sizes ranging from the owner operator of a logging truck to relatively large operators that do all the jobs from falling trees to the delivery of logs to the mill.  Forest contractors may grumble about their contracts and conditions, but these hard working long suffering folk have been loyal to the system of arrangements for managing the public forests of BC. Forest contractors have taken severe knocks on the coast of BC for some time and reductions in harvest in the interior of BC caused by the mountain pine beetle epidemic will have negative effects.

Forest contractor associations like the Truck Loggers Association have been around for more than 70 years. These associations are aware of the need for good forest stewardship and are led by robust characters and personalities that might be inclined to challenge the status quo. However, they generally give support to the existing system of forest management conducted by the BC Government and forest corporations. These loyal folk probably do not want to bite the hand that feeds.

When the present system of forest management started to take shape at the end of WWII, it took place with mutual and shared expectations and responsibilities. Harvesting rights were allocated to forest corporations that agreed to invest in wood processing plants in local communities. The forest corporations often played a key role in the development and life of these communities. Forest corporations such as MacMillan Bloedel were flagships of the BC economy, and the community of Port Alberni on Vancouver Island thrived in the heyday of this company. Now, this company is gone and a new form of global capitalism is the order of the day. Forest corporations have closed wood processing plants in some communities such as Youbou  on Vancouver Island and the BC Government has allowed the retention of the associated harvesting rights. Loyalty and mutual obligation seem to be largely removed from present circumstances.

Loyalty and obligation are necessary elements in the relationship between a society and its forests. New capitalism and regressive political conservatism and the notion that markets will fix everything is a philosophy that will lead to stumps rather than forests or at very least some bumps in sustainable supplies from forests. Most of BC's independent forest contractors have already felt a few bumps in the road. Perhaps it is time for BC's forest contractors to envision themselves in some new arrangements for governance and management of our forests.

Although most forest contractors do their work in a public forest, very few would want to work for the government or a centrally managed government forest. Given the huge size of BC's public forest this arrangement would probably end up in a total shambles. If the trustee ship for public forests was devolved to local forest trusts, they would contract to these local forest business operations that would have an elected board and professional staff. Harvested timber would be sold on an open market. The open market would encourage diversity in wood products and higher return to the forest for quality timber. The local forest landscape would be operated on a sustainable basis ensuring a continuity of local work.

Posted by Andrew Mitchell at 3:06 PM