Odd Balls in the forest 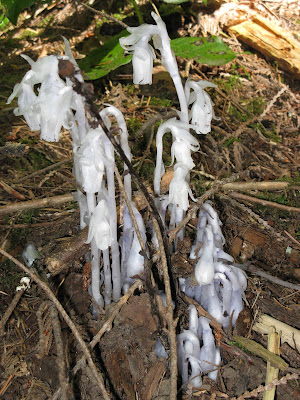 Forests attract odd balls of the two legged variety, but this is a vegetative or odd ball plant known as Indian Pipe (Monotropa uniflora). It is also known as the Ghost plant and one lady in the forest described it as an albino plant. It is a saprophyte or a plant that gets its energy and nutrients from decaying matter and fungi associated with tree roots in the soil. It has no chlorophyll for photosynthesis that gives the green color to most plants.

Indian pipe is quite unusual and it is found in temperate forests in British Columbia and other forested parts of North America. It is also found in South America, Japan and China. Its wide range  indicates that it is a prehistoric plant that has survived from the Jurassic period when dinosaurs walked the earth.
Posted by Andrew Mitchell at 3:24 PM

Email ThisBlogThis!Share to TwitterShare to FacebookShare to Pinterest
Labels: Biodiversity