Forests and the visual landscape 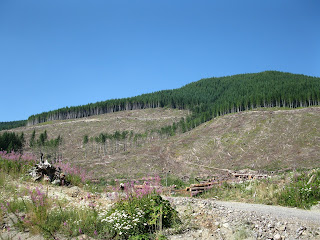 Forest change and activity can stand out in the visual landscape. The size of the clear cut in this photo stands out in the landscape. Shape is even more important than size. A small geometric clear cut with straight edges will grasp the eye, while one of similar size with a natural shape with no straight lines will blend into the landscape.

Selection silvicultural systems and shelterwood systems allow for forest regeneration as the older crop trees are gradually harvested. The harsh color contrast of clear cuts are avoided and a harmonious landscape appearance is maintained. The visual appearance of a forest landscape can be maintained with non clear cut silviculture. However, clear cuts can also be designed to reduce visual impact. 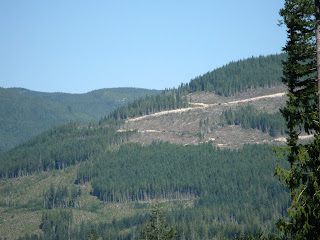 While this clear cut is visible, its non geometric shape blends better than a square or rectangular block on the hillside.  A similar clear cut on the lower left of the photo is just starting to green up and blend with the forest background. Foresters and landscape specialists use geographic information computer systems and specialized software to produce 3-D projections of proposed cut blocks to plan and reduce visual impacts.

Some of the methods and techniques for planning the visual appearance of forest landscapes originated in Great Britain for rather unlikely reasons. Britain set up a Forestry Commission to establish forests after experiencing timber shortages in World War I. This trend of forest establishment continued after World War II. Straight lines were a common feature of forest boundaries. Sometimes these were old property boundaries. In Scotland and other parts of Britain, deer were a problem and new forests needed to be surrounded by high deer fences. To reduce the total length and cost of fencing large square or rectangular blocks of forest were established. Even within geometric blocks of forest, there might be a geometric block of larch, a conifer that turns golden in the fall and sheds its needles. Rather than cut blocks it was geometric blocks of forests in the landscape that drew negative attention from the public. Over the past half century methods and techniques that are a blend of art and science have been employed to make the forests blend more harmoniously into the landscape. Some of their texts even show photographs of the transition of natural forests to alpine conditions in British Columbia as examples.
Posted by Andrew Mitchell at 2:33 PM