Fall in a coastal rain forest 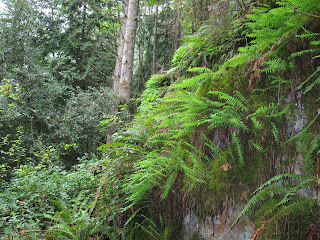 There is a hypothesis that the conifers of the Pacific Northwest are bigger than conifers elsewhere in the world because size gives a water holding advantage to overcome summer droughts. Some fern species get dehydrated and die back in the summer drought. They can spring new fresh growth in the Fall to take advantage of the wet moist fall, winter and spring. (See photo).

There is some maple alder and other deciduous species that give some Fall color but otherwise the forest stays green. Most conifers are evergreen with the exception of Larch that turns golden and looses its needles in the Fall. Some ancient living fossil tree species such as Ginkgo and Dawn Redwood, Metasequoia glyptostroboides also change color and loose their leaves like deciduous hardwoods. Although conifers don't shed their leaves or needles like deciduous trees, they do loose old leaves or needles. The summer droughts in the coastal forests cause old needles to die and the first winds of fall will bring a carpet of golden needles to the forest floor.
Posted by Andrew Mitchell at 3:31 PM