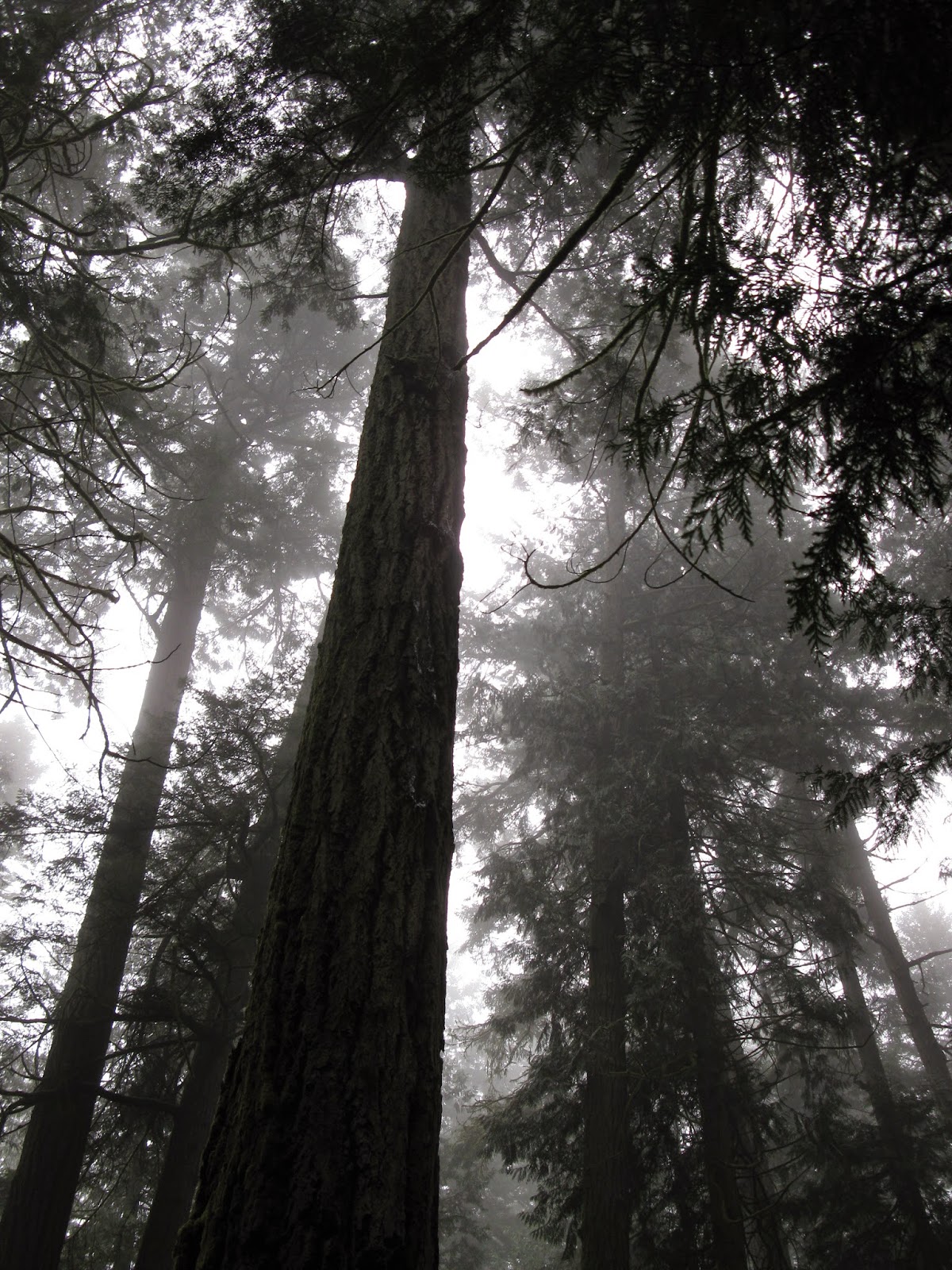 The flow of wet Pacific moisture moves toward the Pacific Northwest, and there is a monsoon like period that goes from October till January. A half to two thirds of the annual rainfall comes in this period.
Posted by Andrew Mitchell at 2:16 PM No comments:


Imagine a country filled with forests of large trees like these: 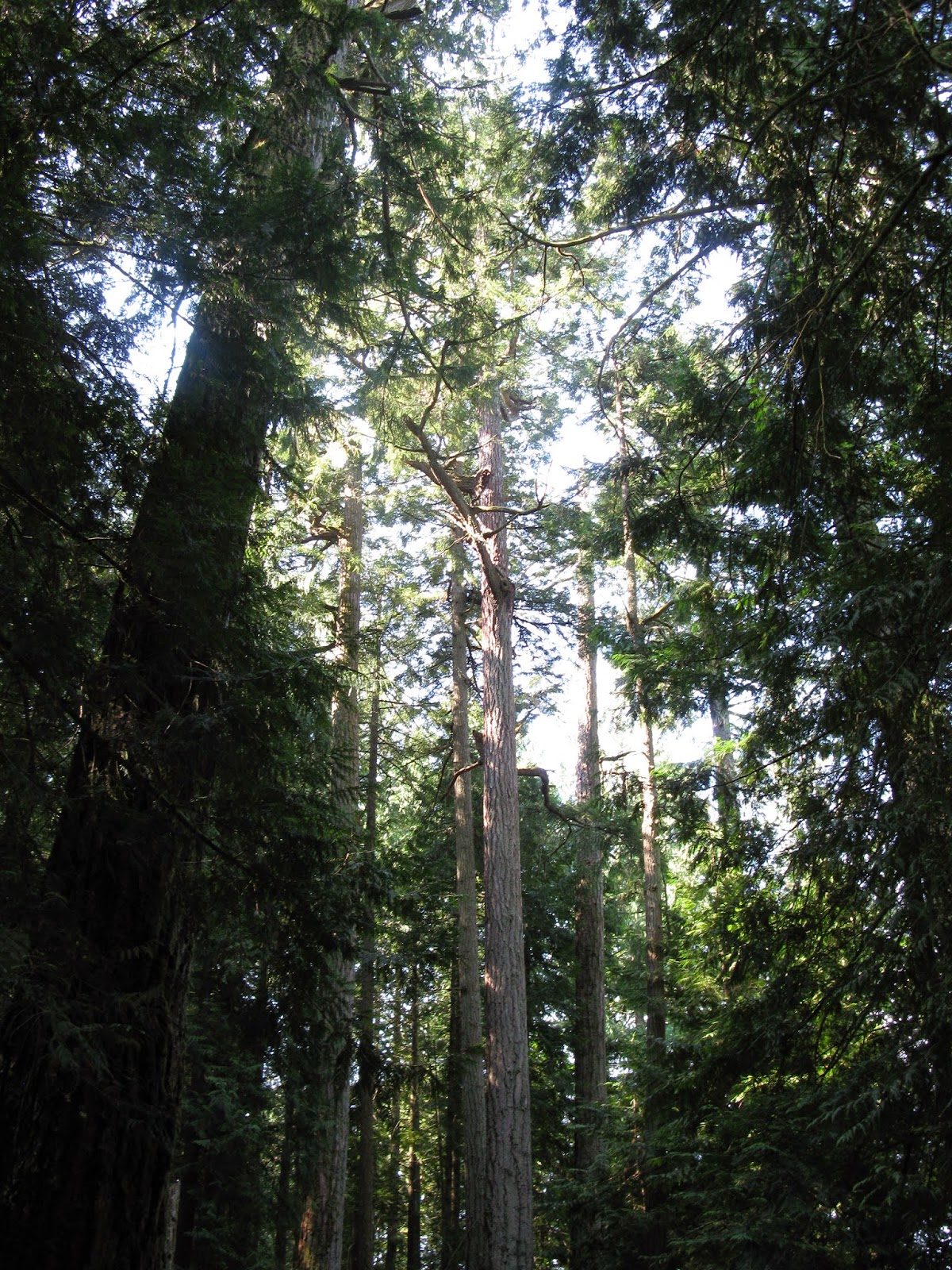 If you had to come up with a wise system of forest management, would you give loggers rights to harvest the trees and expect them to do enough forest management to sustain the forests in a similar condition?

British Columbia is larger than many countries and it was once filled with abundant forests. Most of BC's forests were retained in public ownership. The BC Government would act as the enduring trustee and ensure a wise system of forest management would be applied to sustain the forests. The wise system of forest management developed over the past century is the British Columbia forest tenure system. It operates as described above. Forest manufacturing corporations hold harvesting rights. Their main interest is timber and they are there primarily to harvest wood. Forest management is an add-on responsibility that is often exercised with reluctance. Most of the efforts of the BC Forest Service or Ministry of Forests is taken up with policing the activities of corporate timber rights holders. The plans and procedures needed to deal with the inherent conflict of interest results in inefficient use of trained forest managers. It is a system of timber exploitation with tree planting responsibilities attached.

The forest tenure system is a hypocritical arrangement. The BC Government as trustee of our public forests and forest corporations have made considerable public relations efforts. Cynics say that public relations is just a form of lying, but good public relations usually relies on just enough of the truth to confuse people.  Before the environmental awakening that started about 1970, the BC public was satisfied with figures of all the millions of trees that were being planted. After 1970 good public relations on BC's forests needed some other bells and whistles. One of the largest screw-ups in the history of forest management was successfully ducked. A huge mountain pine beetle epidemic was successfully blamed on climate change or global warming. This was done with the truth that the beetles survive better in mild winters.  However there were other factors. Old pine forests are more susceptible to beetle attack. The timber exploiters had been less partial to pine because it brought lower profits and the BC Government had suppressed fires in pine forests. The net result was an abundance of old pine forests. To put it in public relations terms it was a very successful mountain pine beetle habitat enhancement project with great statistics: 18 million hectares of forest affected and $100 Billion of timber lost.

After 100 years of timber exploitation with tree planting, our forests assets are not quite sustained. The forest industry and forest dependent communities have been battered.  We need to realize that the BC forest tenure system is unwise. However, in face of obvious forest sustainability issues and problems, we remain content to deceive ourselves with the help of public relations from the Government and forest corporations. Sustainable forest management certification schemes are the main prop in this effort. These schemes provide a green or environmental stamping or approval of forest products. They do attempt to promote good forest management and practices. However, the public and consumers do not realize that these certification schemes do not question the adequacy of the legal and institutional arrangements of a forest country or jurisdiction. BC'c forest tenure system does not get questioned. Timber exploitation with tree planting will then earn the green stamp of approval. We can convince ourselves that our  forests are under sustainable management. However our forests, forest dependent communities and forest industry faces sustainability issues.
Posted by Andrew Mitchell at 3:20 PM No comments: